Recently our Gothic and Victorian catalogue has been a little neglected while we've been growing our list of 20th century and modern fiction, but we are working on some exciting stuff that fans of our 18th & 19th-century releases should be excited about!

Ruth the Betrayer; or, The Female Spy was first published serially as a 'penny dreadful' in 1862-63, meaning it was sold in weekly installments for 52 weeks for a penny each. Each issue was eight pages, with one engraving; at the end of the series' run, the publisher would bind up all the parts into a volume and sell it as a complete novel.

Originally published by John Dicks, the same publisher who issued G.W.M. Reynolds's classic penny dreadful The Mysteries of London (also available from Valancourt), the book is credited to "Edward Ellis" and is described by Wikipedia as the "first female detective story".

Which is sort of true, in that at the beginning of the book, Ruth is working as a spy for the police, but in fact during the course of the 1100-page novel, Ruth is many things: detective, spy, thief, murderess, but above all - as the title suggests - someone who betrays every person who gets close to her. Like the best dreadfuls, despite its enormous length the action never flags for an instant; it's a wild thrill ride from beginning to Ruth's ignominious end. The new edition is edited by Dagni Bredesen and will be out in late 2018.

A page taken at random from the original edition, Chapter 71: "What Happened in the Chamber of Death": 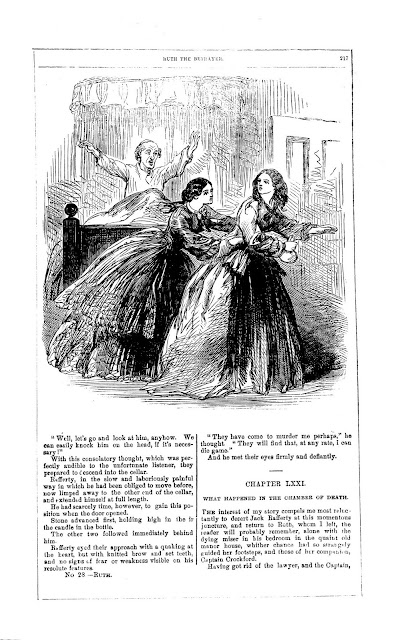 Fans of late 18th-century Gothic fiction know about the hundreds, even thousands, of novels churned out to stock the shelves of the circulating libraries. But did you know that a huge amount of Gothic fiction was also published in magazines?

Valancourt is preparing a three-volume set, each volume devoted to a different periodical: The Lady's Magazine, The Lady's Monthly Museum, and La Belle Assemblée. Each volume will be edited by a university professor and will feature a broad range of Gothic material, including serialized novels, short fiction, and poetry.

The serialized novels in particular were a curious thing, since in a great many cases the writer died or disappeared before sending in the final installment, leading the editors to print impassioned pleas for the authors to contact them with the remainder of the story. The Forest of Alstone, An Original Tale, whose first installment (pictured below) appeared in The Lady's Magazine in April 1792, is one of these unfinished curiosities whose ending we're left to guess at. These volumes should be ready by early 2019. 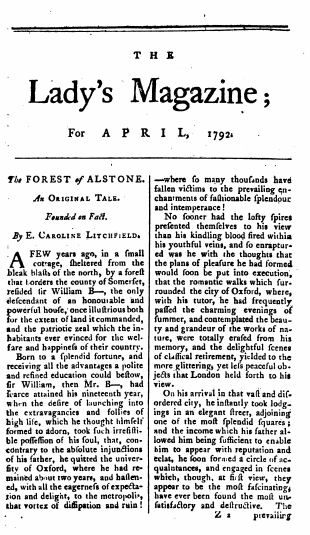 Posted by Valancourt Books at 6:18 PM