Our five Paperbacks from Hell reprints have been one of the most popular things we've ever done, so we couldn't resist doing a sequel! Here's everything you need to know about our second wave of PFH reissues.

Which books will be featured in the second wave?

This super-rare novel (there's literally not a single copy for sale online anywhere, at any price) by Engstrom, whose When Darkness Loves Us was part of the first set of PFH, can be read as a straightforward horror novel about a teenage vampire and her string of male victims, or as a story of madness. Is Angelina really a vampire? Can we trust the story she's telling us? You'll have to read the novel to find out. Features a new introduction by Grady Hendrix and the original cover painting by Bob Eggleton.

Martindale's sought-after book (it sports a 4.12 rating on Goodreads and the cheapest secondhand copies are $32+) also takes vampires as its theme, but there the similarities with Engstrom's book end. In Nightblood, a Vietnam War vet whose brother was killed by a vampire is out for revenge on the undead, with the help of his brother's ghost and an arsenal of high-powered weaponry. When an army of the undead descends on an Indiana town, our hero goes into action in this wild vampire shoot-'em-up romp. Features a Grady Hendrix introduction and the original cover by Greg Winters.

One of the books we've had the most requests for over the years, Tuttle's book appeared as a paperback original in the UK and was never published in the US or subsequently reprinted anywhere. Copies regularly sell for $100 or more. This volume collects 13 of the author's best early horror tales, originally published in various magazines. Will Errickson of Too Much Horror Fiction, who will contribute an introduction, says these are tales "with chilling moments of helpless creeping terror" and calls the collection "brilliant". Features the original Nick Bantock cover painting.

I don't think we've ever gotten as many requests for any book as for this rare '70s shocker by Johnson, who published only this one novel. This notorious bestseller about the terrible things that happen after a group of children chloroform and tie up their babysitter is highly sought-after on the secondhand market, and copies go for lofty sums. Read this chilling novel and find out what all the hype is about and why so many readers have requested a reprint of this book. Features a new introduction by Grady Hendrix. Cover art to be determined (the cover to the left is included for illustrative purposes only.)

And last, but definitely not least, is this classic killer dog novel from David Fisher, author of more than 20 best-selling books; this one was the basis for a 1977 film entitled The Long Dark Night.  Animal attack books were hugely popular during the 1970s paperback horror boom, and Fisher's is among the best. This new edition will feature a new introduction by Will Errickson and cover art to be determined (the image to the left is for illustrative purposes only).

When will the second wave be published?

The first title, Black Ambrosia, will ship sometime in October. The remaining books will follow at a rate of about one book every 6-8 weeks, with the series wrapping up around March of 2020.

Are they available worldwide?

Four of the books will be available worldwide. Lisa Tuttle's A Nest of Nightmares, because of rights restrictions outside our control, will be available only in the U.S., Canada, and certain other countries worldwide (it will not be available in the U.K. or the current/former Commonwealth countries, although readers in those countries can import it with free shipping from Book Depository).

How much do they cost?

Will there be a monthly subscription option?

For the first wave, we offered a subscription where we sent out one book per month.  This time, things will be done a little differently.

Instead of publishing a new book on the first of each month, the books will be spaced out a little bit more, with no releases in December (because of the Christmas holidays). Thus, you may receive one book in October, one in November, and then receive your third in January. It is possible you will receive more than one book in a given month, since we will be sending the books as soon as we have them from the printers -- we won't hold on to them and make you wait for them!

We will regularly update our Facebook and Twitter pages to announce when books are shipping, and if you have a question or concern, you can contact us at any time.

How much for the set? 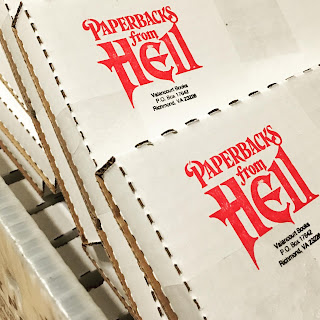 Important (non-U.S./U.K. customers): Shipping costs outside the U.S. are expensive! Customers in Canada, the EU, and elsewhere can still preorder the entire set for $85; however, the five books will all ship together via UPS in one box once they are all available (Feb./Mar. 2020), rather than five separate shipments.

To order, visit our Paperbacks from Hell: Wave Two page

What are the benefits to preordering the entire set instead of just buying the books individually on Amazon?
Thanks for visiting, and welcome back to Hell! Happy reading!
Posted by Valancourt Books at 3:45 PM 34 comments:

Call for Submissions: The Valancourt Book of International Horror Stories

Following the success of our three volumes of the Valancourt Book of Horror Stories series and the inauguration of our new Valancourt International series, we are currently open for submissions for our forthcoming Valancourt Book of International Horror Stories. Submissions are welcome from authors or publishers.  (If you are not an author or publisher but would like to recommend a favorite author or story, please feel free to do so!)

1.  The story must have been previously published by a professional publisher in either a print or electronic publication. (We are not looking for unpublished or self-published work at this time.)  Stories must be no longer than 8000 words.

2.   The story must originally have been written in a language other than English.*  Submissions of stories in regional or minority languages or in languages traditionally under-represented in American publishing are especially welcome.  *Exception: English-language submissions are acceptable if the author is from a country other than the United States, United Kingdom, Canada, Ireland, Australia, New Zealand, or South Africa.

3.   The story must be a "horror" story; however, we define this term as broadly as possible to include stories of the occult and/or supernatural, weird fiction, tales of the unsettling, uncanny or macabre, ghost stories, etc.  Stories in adjacent genres, such as dark crime, dark fantasy, or black humor, may also be considered.

4.   Here at Valancourt Books, we read quite a few languages.  If your story is written in one of the following languages, please submit it in the original language; an English translation or other accompanying material in English is optional, but not required:
If the story is written in another language that we cannot read, the story must be accompanied by either a translation (which may be rough; it need not be a professional translation) or a synopsis/summary of the story that will enable us to form an opinion as to whether the story may be right for the book before going to the expense of having it translated. If in any doubt, feel free to contact us.

5.   Anticipated publication date is October 2020.  We will accept submissions through April 30, 2020.  Stories received earlier have a higher chance of being read and chosen than stories received at or near the deadline. Stories not accepted for this volume may be resubmitted for consideration for future volumes.

6.    Authors whose stories are accepted for publication will be offered a fee as well as a contributor's copy of the published book.

Please submit materials via email (PDF, Word, EPUB are all acceptable) to jjenkins@valancourtbooks.com.  Submissions may also be mailed to: Valancourt Books, P. O. Box 17642, Richmond VA 23226 USA.  Please note that books and other materials mailed to this address will not be returned.
Posted by Valancourt Books at 3:23 PM 1 comment: