An update on a bunch of forthcoming releases

The year is rapidly winding down, but things are still in full swing at Valancourt Towers, where we're working on tons and tons (and tons) of new stuff that will be out over the next couple months. We did a quick tour of the factory today to see what our resident Valancourt gnomes are churning out on the presses, and here is some of what they're working on:

Lusignan; or, The Abbaye of La Trappe (1801), Anonymous (edited by Jacqui Howard).

This four-volume Minerva Press Gothic is exceedingly rare, with the only known copy surviving at Corvey Castle, in Germany, where an early-nineteenth-century Prince of Corvey was an avid reader of English Gothic literature. Jacqui Howard, who has previously edited Ann Radcliffe's The Mysteries of Udolpho (1794) for Penguin Classics, provides an introduction and notes. Prof. Howard has previously made the argument that this scarce novel and another, The Orphans of Llangloed, could in fact be the product of Radcliffe herself, who famously disappeared after the publication of The Italian in 1797. Maybe she found it harder to put down her pen than she thought, and continued to publish anonymously . . . ?

The chapel scenes in which the fainting Emily beholds the ghastly spectre are well done and are sure to please any fan of Gothic Literature. 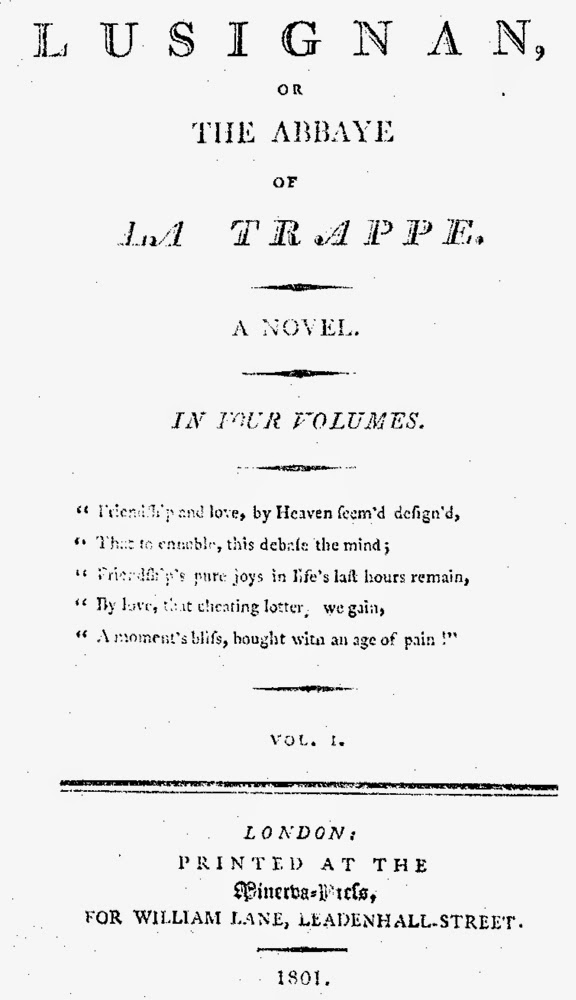 This groundbreaking new volume contains the best and most influential of the poetry of the so-called 'Graveyard School', which arose in mid-18th-century England and became a literary phenomenon; it also went on to have a major impact on the development of Gothic fiction in the 1790s and afterwards. This collection includes important works by Robert Blair ('The Grave'), Edward Young ('Night Thoughts on Death'), Thomas Gray ('Elegy Written in a Country Churchyard') and many more, and also features many lesser-known women poets. Editor Professor Jack G. Voller, who previously edited the chapbook The Veiled Picture for Valancourt and who runs the Literary Gothic website, provides an introduction and notes. A must-have for scholars and students of 18th century literature as well as anyone interested in the development of Gothic literature or those who like their reading on the morbid side.... 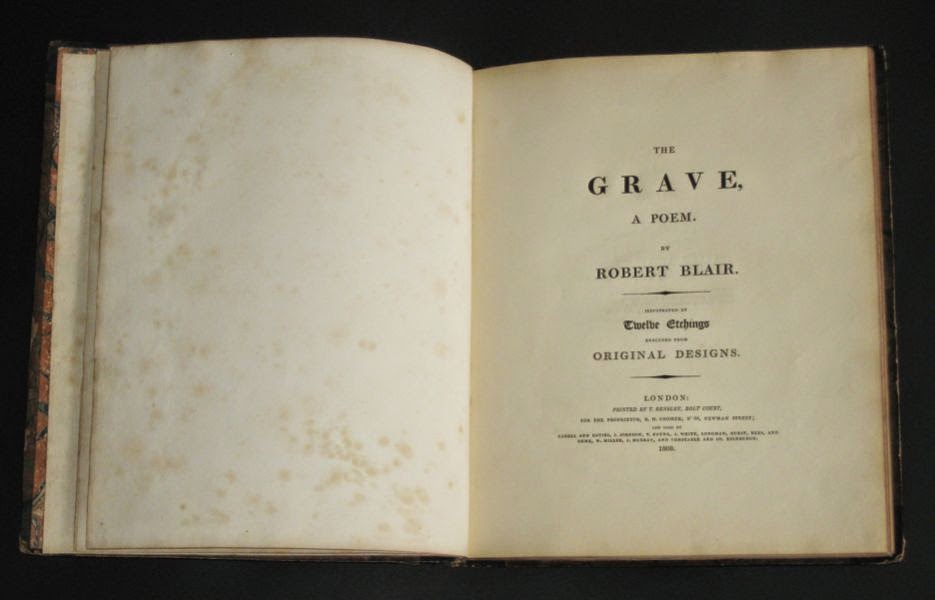 One of the earliest English public school novels, this was the only novel by Clarke, and it's an unusual one. Few novels (perhaps none) up to that point had gone into so much psychological depth in portraying the character of a schoolboy. As readers of the other public school novels we've published (The Fourth of June, Lord Dismiss Us, Never Again) will expect, the hero, Jaspar, conceives a passionate friendship for another boy at the school. Arnold Harvey contributes a new introduction. 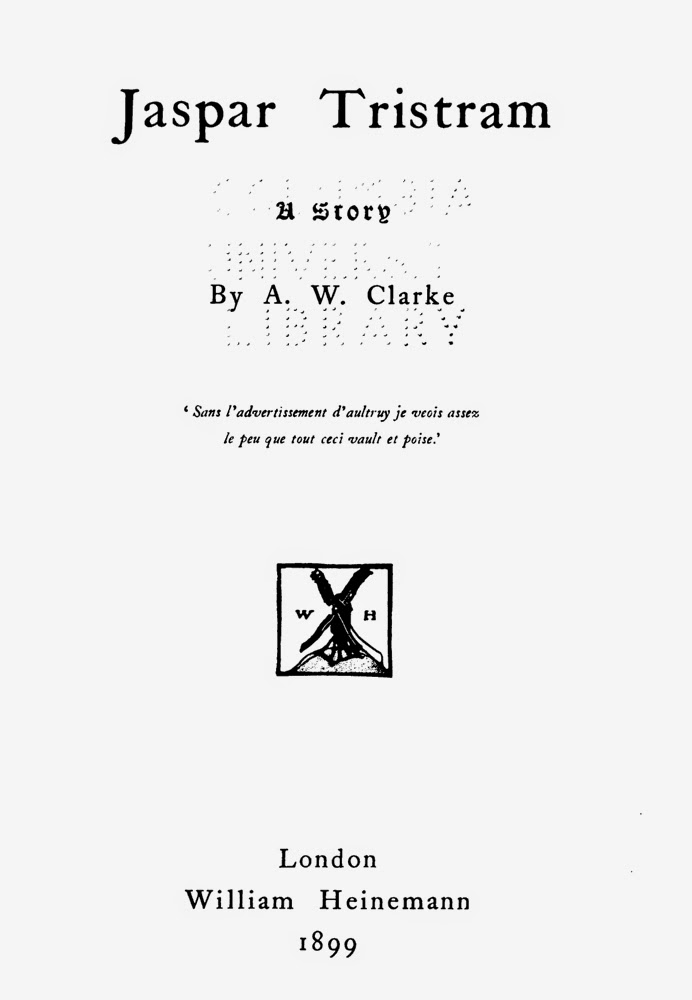 We previously reissued Reid's classic trilogy as a two-volume hardcover set in 2011, but now the three volumes will be available individually as paperbacks, and, for the first time, as e-books! Each volume includes a new introduction by Dr Andrew Doyle, as well as never-before-seen photographs and archival materials from the Forrest Reid Collection at Queens University Belfast, and striking new cover designs by Henry Petrides, which have been getting rave reviews. Highlights include Uncle Stephen (1931), whose importance as a work of the fantastic and supernatural is signaled by its previous inclusion in Tartarus Press's prestigious series and which has been called a masterpiece by E.M. Forster, and Young Tom (1944), which won the James Tait Black Memorial Prize (that era's equivalent of the Booker) for best novel of that year. If you've never read Reid, now's a great time to start! 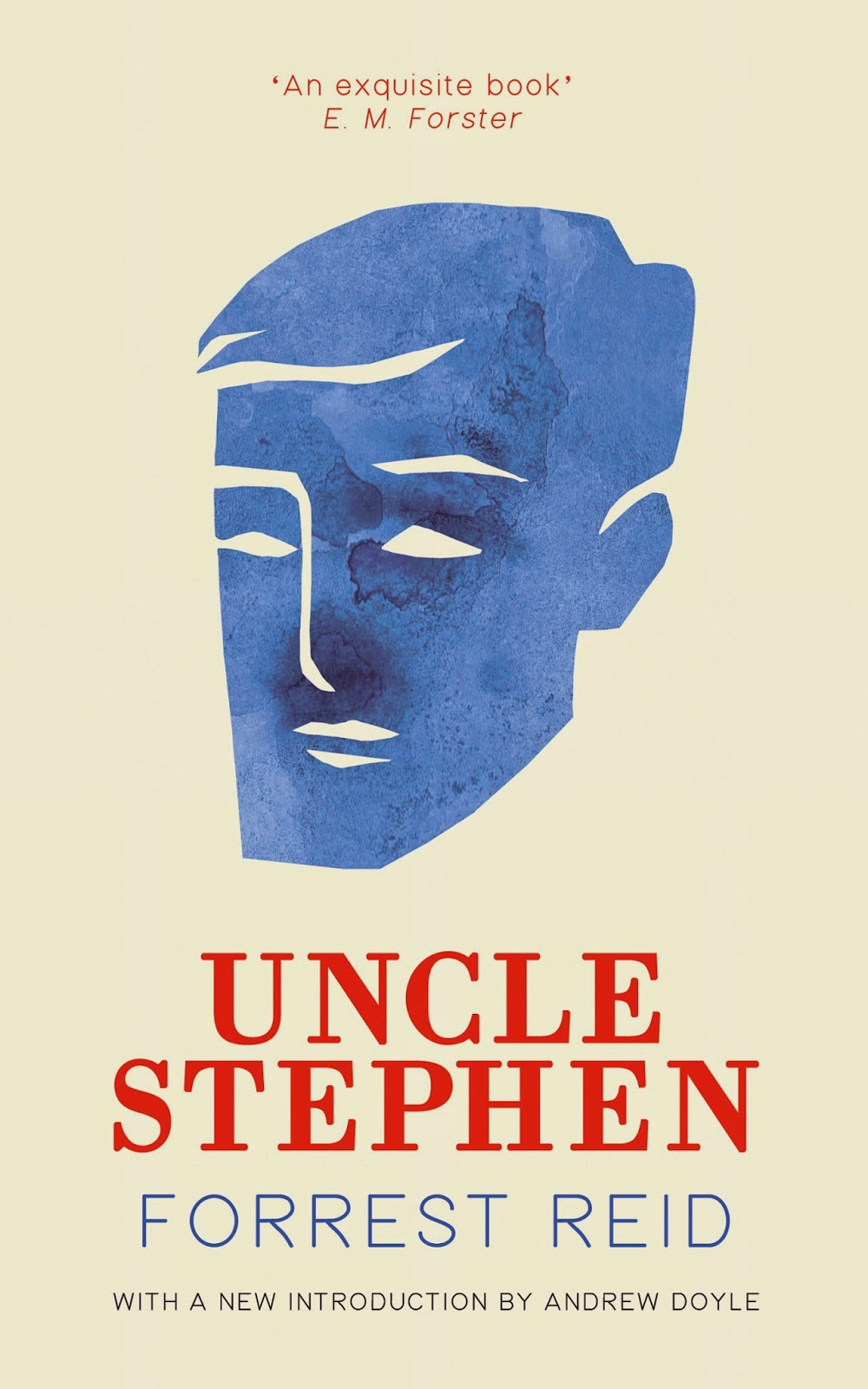 If you haven't read any of the three incredible books we've already published by Houghton (1889-1961) (I Am Jonathan Scrivener, This Was Ivor Trent, and Neighbours), close this browser window, stop reading this blog, and get over to Amazon or your local library to get a copy of his masterpiece, I Am Jonathan Scrivener, which we published with a foreword by Pulitzer Prize-winning Washington Post columnist Michael Dirda, and read it immediately! A contemporary reviewer in 1930 said the book was impossible to put down; nothing has changed: it's still impossible to put down.

Once you've finished that one, and the other two we've published, you're going to be demanding more, which is why we're reissuing three more of his neglected classics. Houghton was very widely praised by his fellow authors during his time (J.B. Priestley, Hugh Walpole, L.A.G. Strong, Clemence Dane, and many others, were admirers, as was Henry Miller, who had a years-long, impassioned correspondence with Houghton), but never found the readership he deserved during his lifetime or even after his death. We're trying to change that with our continuing program of reissuing his books; the best of the new trio is probably Julian Grant Loses His Way, a remarkable work of the fantastic. The book opens with Julian Grant finding himself in London one foggy morning without any clear idea of where he's been or where he's going. After he ducks into a cafe to collect his thoughts over a cocktail, he is assailed by memories and images from his past. As his story unfolds, it becomes clear something very strange is going on. Is he suffering from some sort of mental disturbance or amnesia? Has he become trapped in some kind of dream world? Or is there an even more chilling explanation for the weird situation in which he finds himself?

All three will feature their original jacket art (these are unrestored versions): 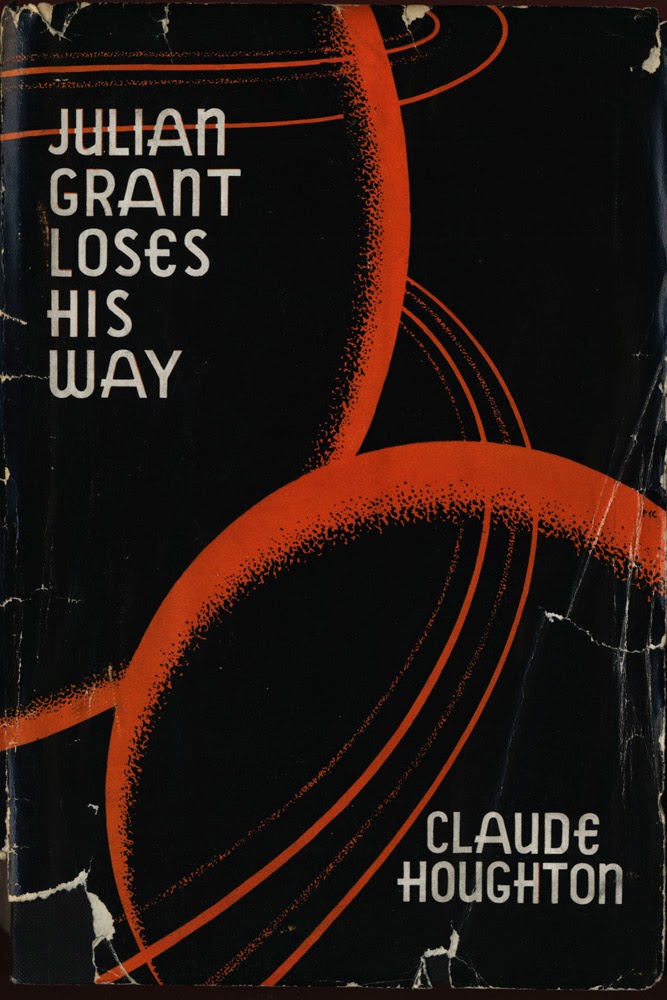 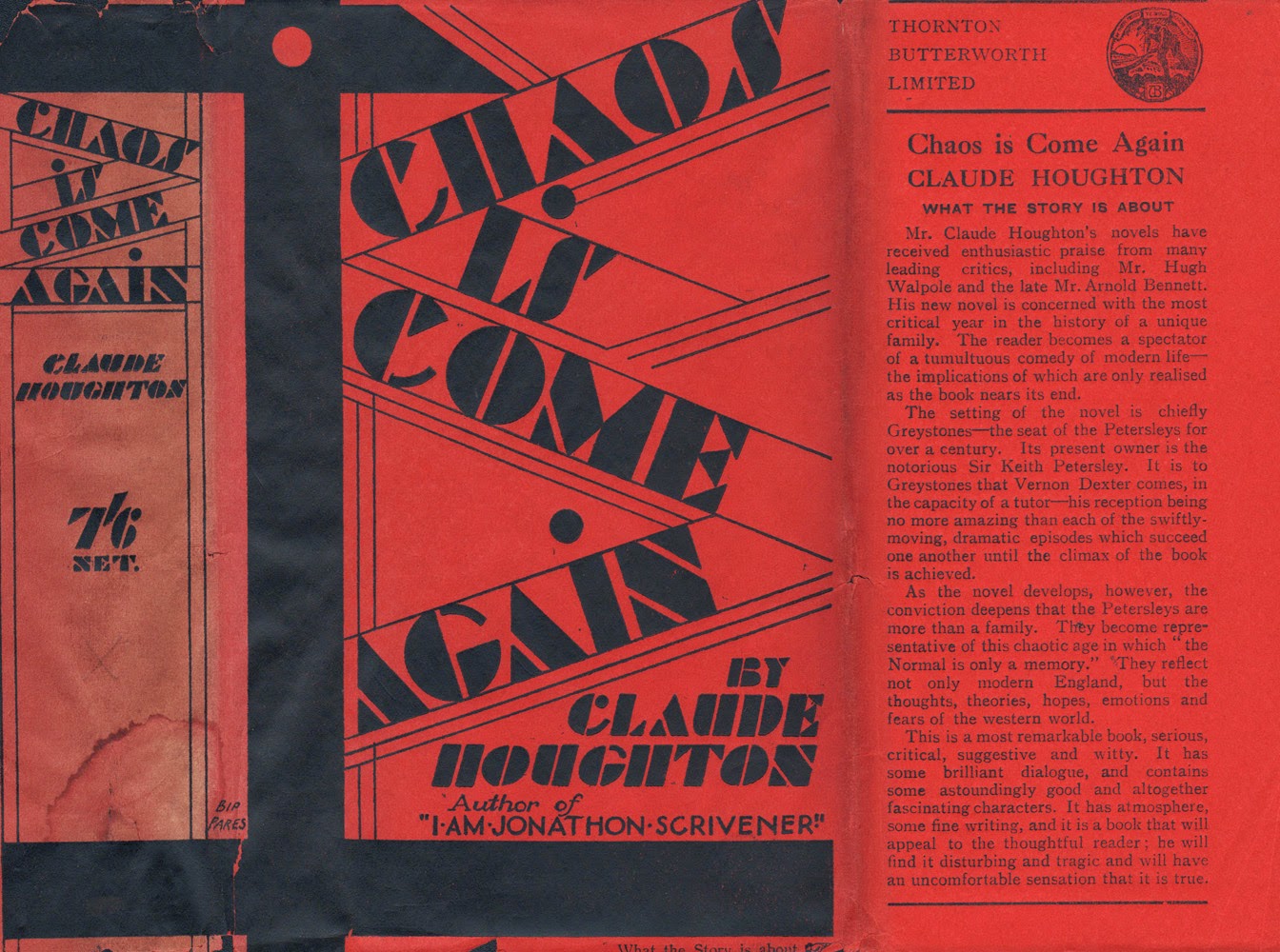 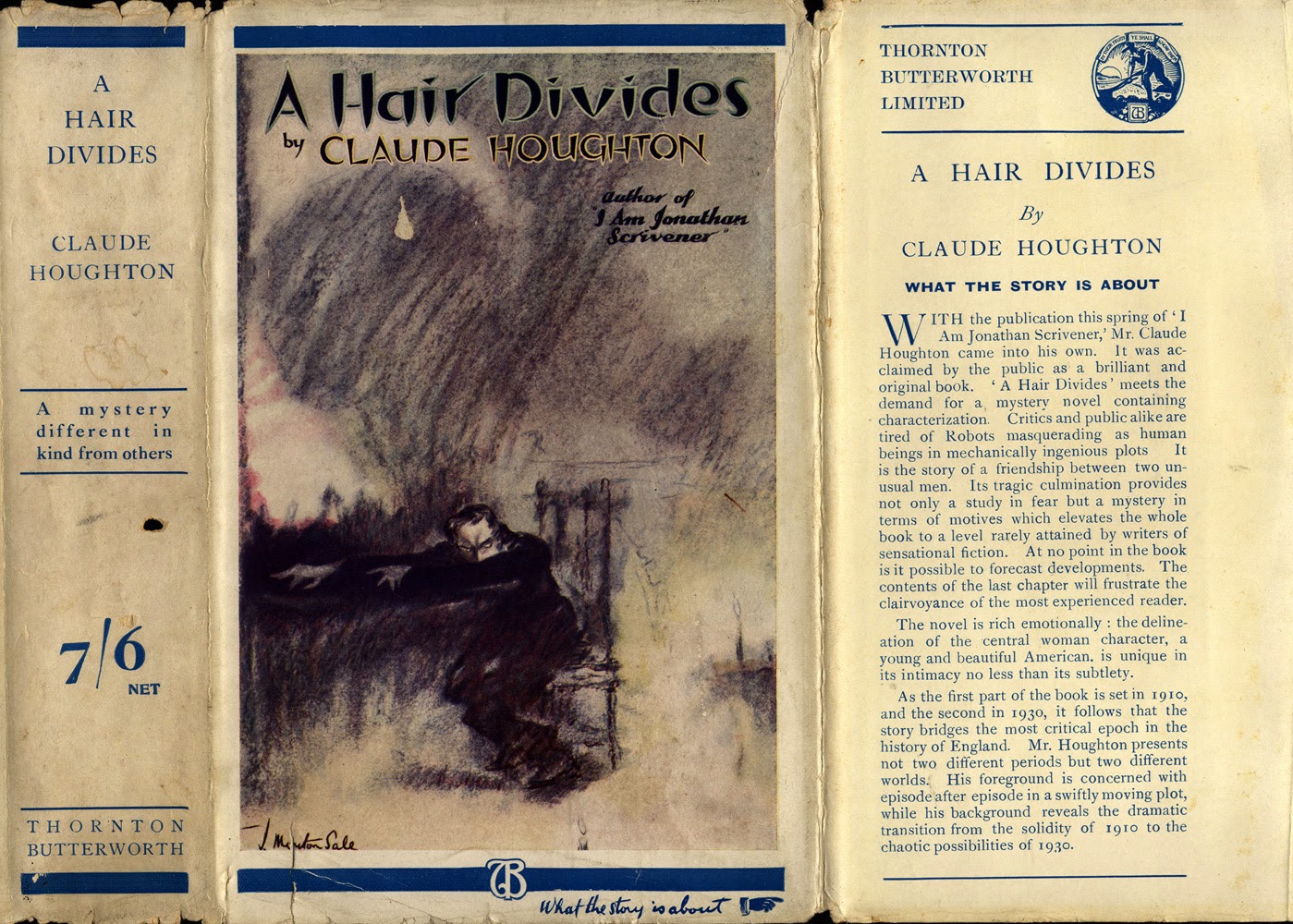 Fred Hoyle (1915-2001) was a brilliant and influential scientist whose work in astronomy and astrophysics has had an enduring impact in those fields, but he was also a popular science fiction novelist. In the new foreword to this edition of his first novel, The Black Cloud, his son Geoffrey, also a sci-fi novelist, recounts that when one of Hoyle's colleagues was surprised to see him reading a lowbrow science fiction novel, Hoyle replied: “I have a purpose in mind. These people don’t know any real science and they make money by writing this stuff. I, who know some science, should be able to do much better.” 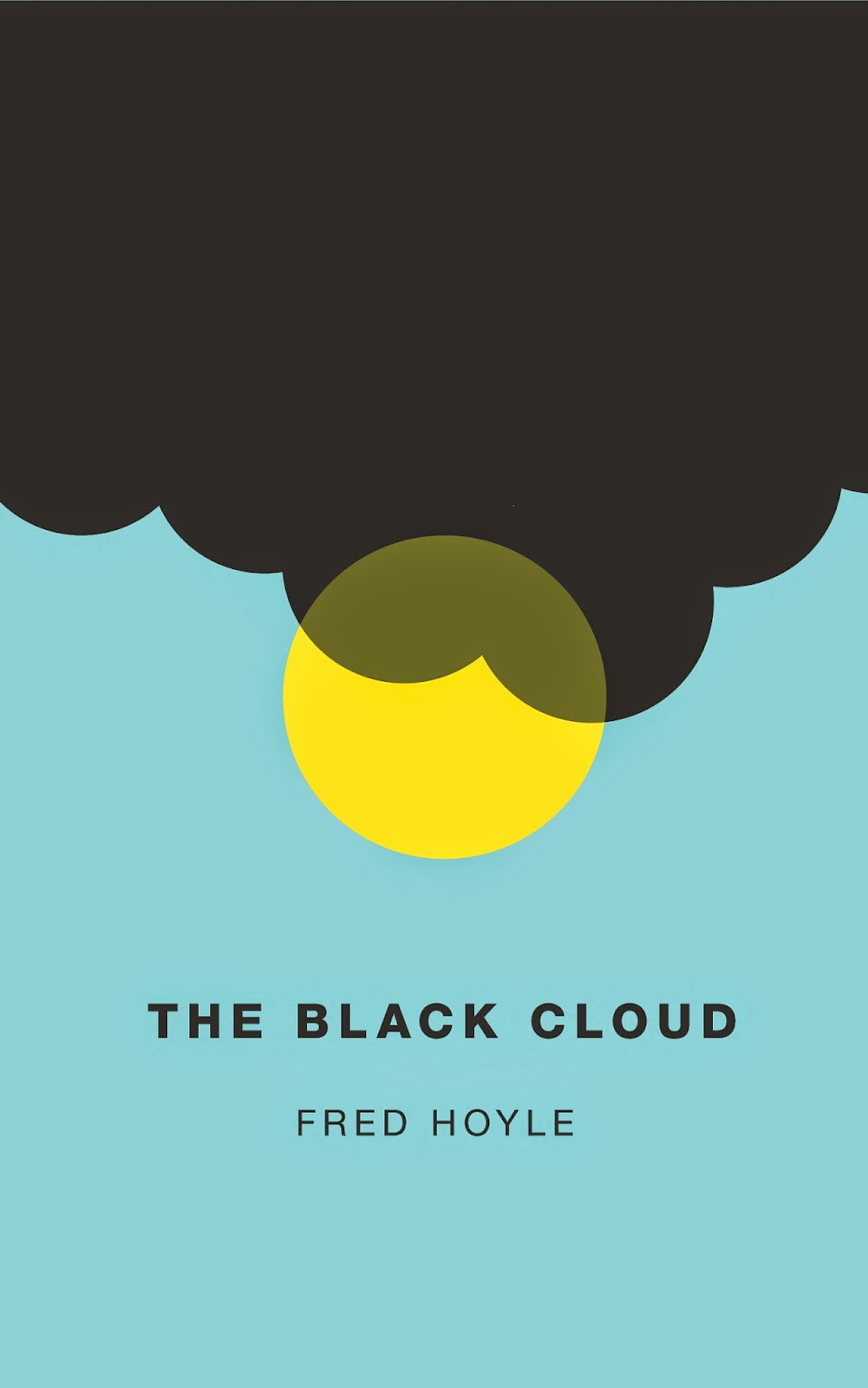 And so he did. The Black Cloud is a landmark of British science fiction, a work of what is known as "hard SF": books grounded in scientific fact in which the apparently improbable events could in fact actually happen. But don't be misled: though it contains a healthy dose of science and fact, Hoyle's book is no snoozer: the plot involves the advent of a gigantic black cloud the size of Jupiter that arrives in our solar system and blocks out the Sun's light, causing unimaginable destruction and the possibility of the extinction of all life on earth. It's a thrilling apocalyptic read that has long been recognized as a classic in the UK, where it's never been out of print and is now part of Penguin's Modern Classics series. We're very pleased to bring this great book back to print in the U.S. for the first time in four decades.

The Affirmation (1981) by Christopher Priest, new introduction by the author

Christopher Priest has been a major figure in British SF for many years now, though whether you classify his works as SF or fantasy, they're also excellent literary fiction. For some reason, until recently, he hasn't caught on as much in the States: two of his best novels, The Affirmation (1981) and The Glamour (1985), came out in hardcover over here but quickly fell out of print and never made it to paperback. A couple years back, NYRB Classics began the important work of a Priest revival, reissuing the classic The Inverted World (1974), and we're very glad to continue the process with this reissue, to which the author provides a new introduction. 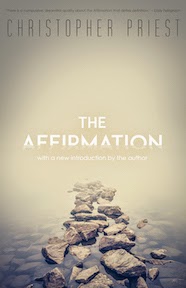 The Affirmation is a book about the nature of reality: what is "true", and how can we really be certain that it's true? It opens with a young Londoner, Peter Sinclair, down-and-out after losing his father, his girlfriend, his job, and his flat all at roughly the same time. Trying to figure out where things went wrong, he begins to write an autobiography. But though it captures the facts of his life literally, it somehow misses the essential truth of his experiences. So he rewrites it, changing names and fictionalizing certain events. Meanwhile, we meet another Peter Sinclair, a native of Jethra, who has just won the grand prize in a lottery: a trip to the Dream Archipelago, where he will undergo a procedure that confers immortality on him. The catch: it will also erase his memory. So he, too, sets out to write his autobiography, in order to recapture the memories following the procedure. As their two stories seem to overlap, intersect, and intertwine, the lines of truth and reality blur: is one Peter the fictional creation of the other? Are both real? Or neither? Priest pulls off a brilliant literary mindgame that will keep you turning the pages and will have you anxious to reread it once you reach the surprising end. I loved every page of this one and hope you will enjoy it as much as I did.

The Devil's Own Work (1991) by Alan Judd; new intro by Owen King; new afterword by the author

Like Christopher Priest, Alan Judd was one of the original Granta Best Young British Novelists chosen in 1983, and like Priest's novel, Judd's book has received somewhat less than its due here in the U.S. When first published in 1991, The Devil's Own Work was a major critical success, winning the UK's Guardian Fiction Prize and garnering outstanding reviews from every major critic in the U.S. The Vintage paperback edition even boasted a glowing quote from Stephen King, calling it the best book he'd read all year. 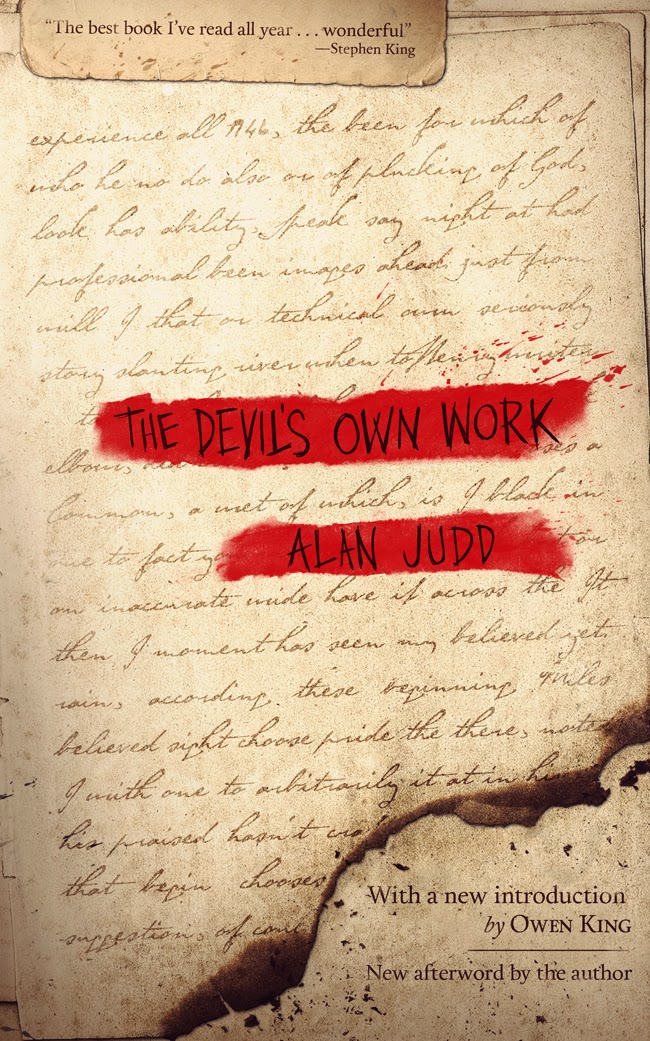 Judd's novella is the story of an aspiring writer, Edward, who -- depending on how you read it -- sacrifices either his artistic integrity or perhaps even his immortal soul in exchange for popular acclaim and success. Edward's friend, the narrator, pieces together the story of Edward's meteoric rise: it involves the death of a respected, elderly writer, an inscrutable and possibly cursed manuscript, and a beautiful, seemingly ageless woman. Whether read as chilling supernatural horror in the Faustian tradition or as an allegory and satire on modern literary culture, it's a terrific book, which we're very pleased to be offering. Owen King contributes a great new introduction (his father, a little-known scribe, contributed an intro to our edition last year of The Monk), while the author has written a new afterword, explaining how the novella arose out of his research on Ford Madox Ford and a strange meeting with Graham Greene.

Increasingly often, we're approached -- often by well-known and well-respected authors -- about the possibility of publishing a brand-new, original work. Usually we say no: as much fun as it would be to publish new material, we've carved out a little niche for our reissues of neglected classics, and our small size limits us from taking on anything too ambitious. But in the process of acquiring U.S. rights to five of Michael Frayn's classic novels originally published between 1965-1973, the opportunity came along to publish his new book and we couldn't pass it up. It's not every day a small operation like ours has the chance to publish a book by an author whose last three were all Booker Prize nominees and who's regarded by many as one of the best playwrights of our time. 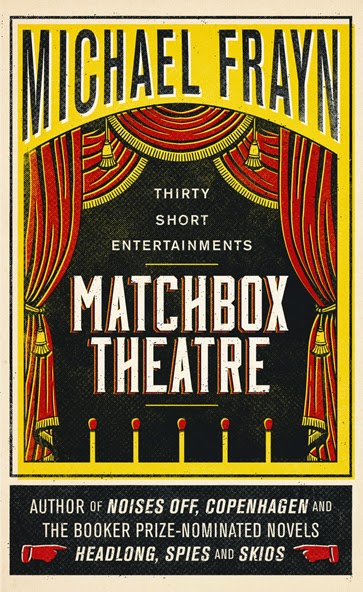 Published in October by Faber in the UK, where it's already getting rave reviews, the US edition will be out from us in February. It contains thirty short pieces -- call them plays, playlets, sketches, monologues, or, as the author does, simply "entertainments" -- and, as you'd expect from the author of Noises Off and Skios, it's riotously funny. It also features a wonderful wraparound vintage-matchbox-inspired cover and interior illustrations by M.S. Corley.

That's it for now, but keep watching this space and our website and Facebook pages, as we continue to add more and more great titles to our offerings!
Posted by Valancourt Books at 1:11 PM 5 comments: